This really is the culmination of a conversation I had with a friend about IR/IPE journals focused on the East Asia-Pacific (EAP) region. At the time, the journal in question was undergoing a bit of a dry period in terms of collecting impactful references to papers published within its pages, and so the question that naturally arose was, ‘What other good region-focused journals are there?’ This is a difficult question to answer for several reasons:

Here I look a sample of six Asia-Pacific journals: Asia Pacific Viewpoint (APV), Asian Politics & Policy (APP), International Relations of the Asia Pacific (IRAP), Journal of the Asia Pacific Economy (JAPE), Journal of East Asia Studies (JEAS), and the Pacific Review (PR). I restrict from this sample journals with a specific disciplinary focus (such as Journal of Asian Economics), journals focused on a particular country within the EAP region, and those based within the region but aiming for a more general scope (like the Japanese Journal of Political Science).

In my journal comparison, I rely primarily on data from Scimago. I ignore Thompson-Reuters impact factors for three reasons: first, not every quality journal has a T-R/JCR impact factor which makes comparison difficult; second, these impact factors are not weighted in terms of influence: being referenced in International Organization is given the same weight as being referenced in the Romanian Journal of Political Science; finally, these IF scores are not freely available, which makes it difficult to track changes over time. Scimago offers a range of journal metrics that are updated on an annual basis. Their Scimago Journal Ranking (SJR) score weights citations based on influence: unlike in the T-R/JCR IF scores, a citation in a highly influential and frequently referenced journal is worth more than a citation in a journal with relatively little impact. Scimago also provides a series of unweighted citation counts; I use their three-year count here (S3C). 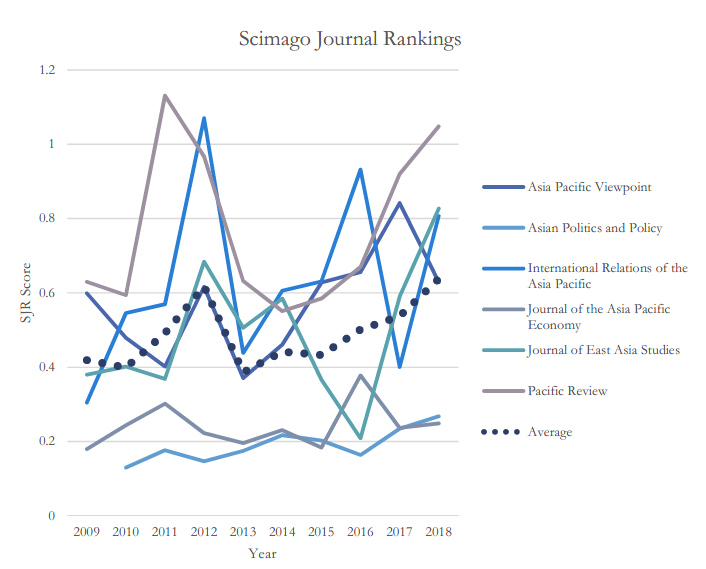 The SJR figure above illustrates the year-on-year volatility for most of these titles. APP and JAPE, the two journals with lower weighted impact by this metric, are less volatile than the others. In any case, these scores range from the first (top) through third quartiles for Scimago’s Political Science & International Relations field, so while there is a fair amount of variation, it’s not as if work in these journals is entirely ignored. Informally comparing performance on this metric puts PR, APV, and IRAP as the top three, with JEAS, JAPE, and APP beneath them.

The data on three-year citation rates presents a slightly less volatile picture for most of the journals. The ordering is similar to that in the previous figure. JEAS in 2012 and 2013 experienced above-average citation rates for this group, driven by a handful of highly cited quantitative IPE studies. IRAP is consistently volatile, while APV and PR are the most frequently cited in most years.

So what does this all mean? I wouldn’t necessarily say that one journal is better than another given these two metrics. Editorial preferences and paper topics have a lot to do with which outlet might be the most suitable for any given manuscript. H-index scores from various sources (Scimago and Google Scholar) seem to point to the same sort of prestige ranking displayed here. In my own work, I’ve run across papers published in JEAS more often than the others. IRAP and PR would probably take second and third place, despite appearing to have a wider general impact.